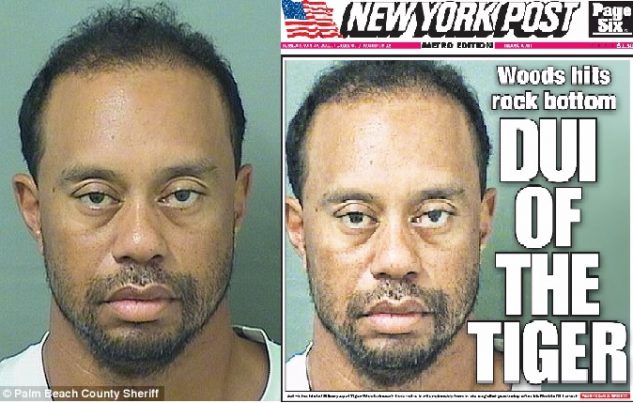 When Tiger Woods claimed that he hadn’t been drinking prior to his recent DUI arrest, many skeptics felt he was just trying to salvage whatever might have been left of his reputation. However, a breathalyzer test appears to support his claim that his erratic driving was actually the result of taking prescription medication and not alcohol.

According to reports, police found Woods asleep at the steering wheel of his car. When he failed the roadside sobriety tasks and spoke in very slow and slurred speech, he was arrested for driving under the influence. The results of a urine test for drugs have not been released, but his two breath samples registered an alcohol level of 0.000.

Woods told police that he was taking several prescriptions at the time, one of which was Vicodin. In addition to having side effects like mental clouding and drowsiness, the product website warns those taking the drug to avoid driving or operating heavy machinery until they know how it will affect them.

It’s not known exactly what other medication Woods was taking at the time, but a recent back operation he underwent means it could be anything from muscle relaxants and other painkillers to sleep aids. While the incident is certainly yet another embarrassment for Woods, it draws attention to a very serious issue that the makers of pharmaceutical drugs do their best to gloss over: The extreme dangers of driving while taking certain prescription medications.

It’s frightening to think that people drive in a state similar to Tiger’s on a regular basis. Police on the scene report that he was extremely confused, believing at one point that he was actually in California rather than his home of Jupiter Island, Florida. He then admitted to officers that he had no idea where he was. The two tires on the driver’s side of his car were flat, and there was damage to his front and rear bumpers. The police report states his eyes were droopy with dilated pupils. He was nodding off, swaying, and had trouble maintaining his balance.

Woods just one of many drugged drivers sharing our roads

According to data from the National Highway Traffic Safety Administration, accidents involving drugged drivers have almost doubled in the last ten years, with the number of fatal crashes on record involving at least one driver who tested positive for drugs rising from 12 percent in 2005 to 21 percent in 2015.

It’s a difficult issue for police, with no widespread agreement on the level of drugs that can impair driving. Behavioral effects can vary by drug, and it also depends on the person who is taking it and their tolerance level.

This situation is even more terrifying when you consider the fact that prescriptions for categories of medications known to impair driving ability, such as anti-anxiety medications, narcotic painkillers, and sleep aids, are rising. For example, the number of opioid painkillers prescribed in our country since 1999 has nearly quadrupled, with a reported 300 million prescriptions for drugs like Vicodin and OxyContin registered in 2015. Meanwhile, AAA reports that prescription meds are the most prevalent of drugs found in drivers who are fatally injured, at 46.5 percent.

Stimulants can adversely impact the ability to judge distances, while anti-anxiety drugs slow reaction times and reduce alertness. Sleep drugs like Ambien can essentially turn people into zombies. Mixing any of these medications can lead to a wide range of unpredictable side effects.

Woods said: “What happened was an unexpected reaction to prescribed medications. I didn’t realize the mix of medications had affected me so strongly.”

Why aren’t more doctors going over the deadly possibilities of taking and combining these drugs with patients before setting them loose on our streets? Most of us are already upset by the prospect of sharing the road with drunk drivers, but drugged drivers could prove to be even deadlier.